I find everything I need in nature. Happiest with a fly rod in one hand and a camera in the other. Walking for miles on any river from Colorado to Montana, Alberta to the BC coast. This is what moves me. The only thing I love more is my wife and my dog.

A decade ago, a professional photographer living in Mexico said to me, "with todays technology, and the ease of digital cameras, anyone can be a photographer" And so I am....

Photography slows me down, makes life more deliberate, and enjoyable. I am a professional wanderer, expert at very few things, if any. I have driven an old FJ40, the long way, averaging 40 mph, from middle America to the coast of California. Taking time out for places like Rocky Mountain National Park, Yellowstone, Capital Reef and Yosemite along the way. Many of the photographs in my gallery are a product of my roadtrips.

In the FJ40 Series you will find photographs of many of the Icons I have owned and loved. My first car at 16, and I have loved them since. Not only do i enjoy photographing these legendary vehicles, I also have made it a mission to save Land Cruisers one at a time. I buy the best I can find, have a friend, and professional shop owner, a 30 year pro, restore them piece by piece. I then drive and enjoy them, admire them, then pass them on. They are Art in my mind, and make me smile. It is a simple thing that brings me peace and happiness.

"Peace, Love and Land Cruisers" (JP) as one "Prophet" used to say. If you see something you like, please send me an email.

The articles below were unsolicited and written by a national off road magazine editor regarding my 1964 and 1978  FJ45 pickups. The 64' pick-up is one of the best I have ever found. Competely restored by a Toyota Dealership owner. I had to do very little in bringing her back to glory. The 78' was a full frame off restore. Hope you enjoy the photos and the write ups.

This 1964 Toyota Land Cruiser FJ45 pickup is said to have undergone a body-off restoration within the last few years, and to have less than 6,000 miles on a very cleanly done Chevy V8 swap. A list of maintenance and upgrades totaling four pages and more than $22,000 shows all work was carried out by TLC 4×4, whose restoration work is second to none. We usually prefer the LWB 45′s, but this one is working well with the canvas top, jump-seats, and stock wheels.

Said to be in perfect, rust-free, fully operational condition, it’s obviously been built with great care and a healthy disregard to budgetary concerns. The seller tells a story about stealing attention from a fly rod holder equipped, black Lamborghini outside a local coffee shop, and we believe him considering a nice pikcup is more in line with practical Montanaite values than a flashy supercar, even if it is foreign. Re-finished in its original Toyota Lily White, the trim is a different, correct shade of off-white, even though they’re nearly indistinguishable at a glance, indicative of the attention to detail seen throughout this old Toyota.

A small selection of work completed by TLC includes a rebuilt front diff, front and rear brake cylinders, and a custom made bed cover using German canvas totaling $5,800 alone. Speaking of brakes,they’ve been converted to four wheel discs, helpful considering the huge power increase on offer from the Detroit V8 under the hood. The big Chevy’s state of tune isn’t mentioned, but even a lower end crate 350 should easily double the standard 3.8 straight six’s 120 or so HP. It’s said to run like new with 180 PSI compression across the board.

The trans is said to be a three-speed stick, but this could be a typo referring to the original spec, as we can’t imagine speccing this type of build and not adding at least another cog, if not two. Trim, paint, interior, and even underneath all look super-clean, leading us to believe it’s seen little if any hard use since the resto. It looks incredible shot in fading light amongst the backdrop of rolling green foothills, completely in its element.

It won’t go cheaply, but could prove a relative bargain compared to an actual ICON-branded FJ, even though it appears to have been prepped with a similarly high level of quality to one of its flashier cousins. If ICONs are for LA, this one’s for Montana.

Another article written by the same off road publication back in April, 2013.

This 1978 Toyota Land Cruiser FJ45 Long Bed (Chassis FJ45177102) is basically our ideal FJ45, at least cosmetically. We love the details like the factory 16″ split rims and the white tailgate lettering to match the roof. We can’t touch the price that this one will need to meet the reserve, but it will still be a bargain compared to an ICON. Find it in Livingston, Montana The short bed ’45s has some odd proportions, so we prefer the long version. We’re pretty sure that that a 1978 model would have come with the squared off grille, but this one wears the more attractive rounded grille from earlier models. It is a subtle difference but a smart looking one. The Warn winch and stock style silver bumper have us contemplating that look for our FJ, but those extended shackles up front could mean steering play.

The interior looks just about perfect. Even details like the headliner and sun visors look well done. The seller claims that the truck only has 53k original miles.

The missing engine photo seems a bit odd, but we suspect it is a clean and stock looking engine compartment. Factory A/C and power steering are desirable options, so the restorer knew what he was doing when he chose this example to restore. We love it. 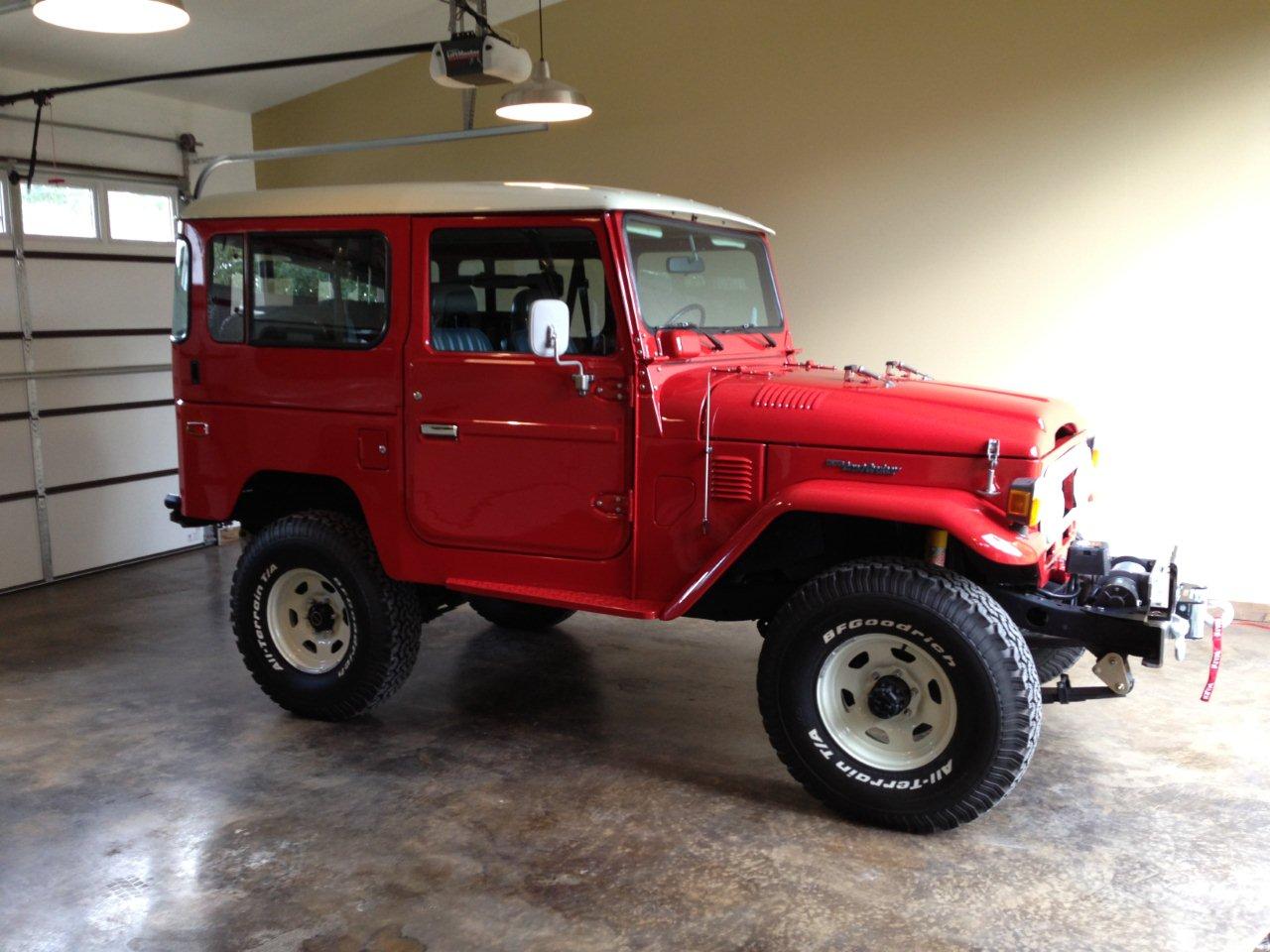 This photograph was taken of my 1984 BJ42 Land Cruiser in Sinclair, WY. If interested in supporting No Kid Hungry, you can go to eBay Motors and buy a print. 25% of all proceeds will go to No Kid Hungry. Type: "Land Cruiser Photography" in the search.